Although three persons contested in the elections, the EC published an artwork on its website with the result of six candidates. It, however, deleted it later and uploaded a different one.

The Electoral Commission (EC) has come under criticism from a section of the public following official declaration of the 2020 election results.

Most of the criticisms have been about how the Commission has not been able to effectively undertake its clerical functions for the purposes of updating the public.

There is record of the Commission revising earlier election result announcements.

The most recent one has been about the release of an artwork announcing the result of the Essikado-Ketan parliamentary elections.

Many pro-opposition Facebook groups including NDC TV and some commentators are sharing images to claim that the Commission published results for six parliamentary candidates for the Essikado-Ketan seat when in fact, only three people contested for the seat.

Their claim is to make the case that the Commission’s data or declared results cannot be trusted. 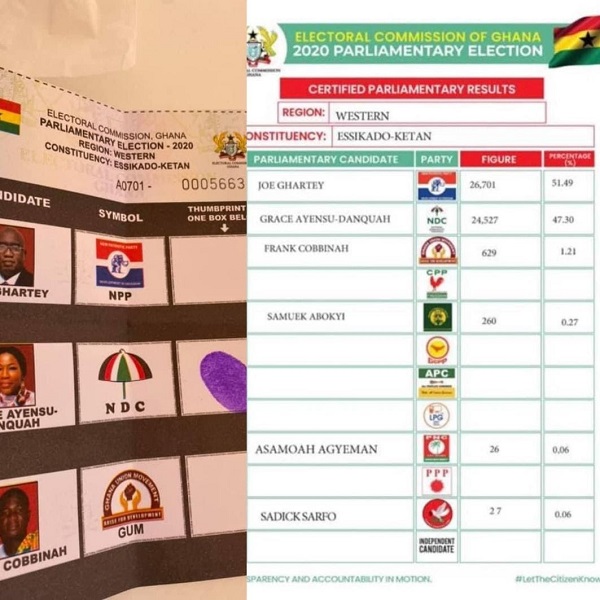 A notice of poll, sourced from the Essikado-Ketan constituency in the Western Region, confirmed that the only three candidates contested in the elections. 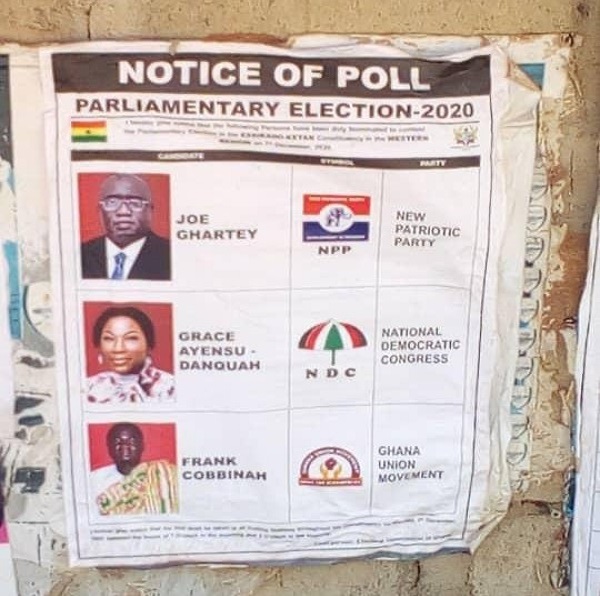 Media reports such as one reported by Citi News also accounted for only three candidates in that election.

Further checks, using the serial number A0701 on the sample ballot paper shared by the claimants to make their case confirms that, the ballot paper shown is the actual ballot paper used on the day of voting in the Essikado-Ketan constituency.

Did the EC make any publication of six candidates?

Scanning through the Electoral Commission’s website, we found that it had uploaded several of the parliamentary results on Thursday, December 11, 2020.

The results included Essikado-Ketan. However, unlike the image being shared on social media by the claimants, the document featured the actual three candidates who contested for that seat.

Did the claimants ‘photoshop’ their copy of the results sheet?

With the possibility that the EC uploaded and later deleted the document being shared by the claimants, we conducted a search in the webpage’s source code and discovered that within the chain of other results uploaded on Thursday, one file had been removed after it was uploaded. 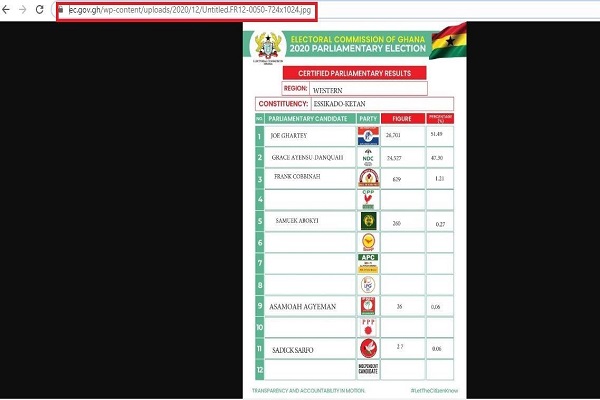 That file is the one being shared by the claimants, confirming that indeed, the Electoral Commission uploaded that copy as parliamentary results for Essikado-Ketan but later deleted it.

The Electoral Commission indeed shared an Essikado-Ketan parliamentary results document with results for six supposed candidates although only three people contested in that election. It, however, deleted it later and replaced it.

#TheList: Akufo-Addo retains Chief of Staff others at Presidency

GH Elections 2020 20th January 2021
0
Lawyer for John Mahama in the election petition case, Tsatsu Tsikata has notified the Supreme Court of an application for review of...

Travel 20th January 2021
0
Paris says it will test its first flying taxis in June, the first step in an ambitious plan to establish a fully-functioning...

All demo against EC, Jean Mensa must be halted – High...