The Ghana Institute of Architects says it has nothing to do with the suspect arrested over the murder of two children and one other, at Abesim in Sunyani in the Bono region.

The suspect, Richard Appiah, allegedly killed a 12-year-old, a 15-year-old, and a yet-to-be-identified man.

The bodies were found in his living quarters in Alaska, near Abesim, on Friday, August 20, 2021, with some of the body parts kept in his fridge.

Richard Appiah was described in a police statement giving details of the murder as an Architect.

But the Institute, citing the Police statement, stated that Richard Appiah does not satisfy the needed provisions in the ARCHITECTS ACT, 1969 (N.L.C.D 357) to be called an Architect.

In a press release signed by the Honorary Secretary, Augustus Richardson, the Institute said: “the Ghana Institute of Architects would like to categorically state that Richard Appiah is NOT an Architect. The ARCHITECTS ACT 1969 (N.L.C.D 357), Section 10, qualifications, states: “10. Qualifications: Subject to section 11, a person is registered as an Architect on payment of the prescribed fee if that person is a member of the Institute.”

It added that an architect is also a person who has passed the qualifying examinations in the courses prescribed or approved by the Board under the Act and completes practical training of the description and for the period prescribed by the Board.

“[An Architect] is a person who was a member of the Ghana Institute of Architects immediately before the commencement of this Act. In accordance with the laws of Ghana governing Architects and architecture, Richard Appiah DOES NOT satisfy any of the above provisions of the ARCHITECTS ACT, 1969 (N.L.C.D 357).”

The Ghana Institute of Architects stated that as such, Richard Appiah cannot call himself an architect neither can he be referred to as one. 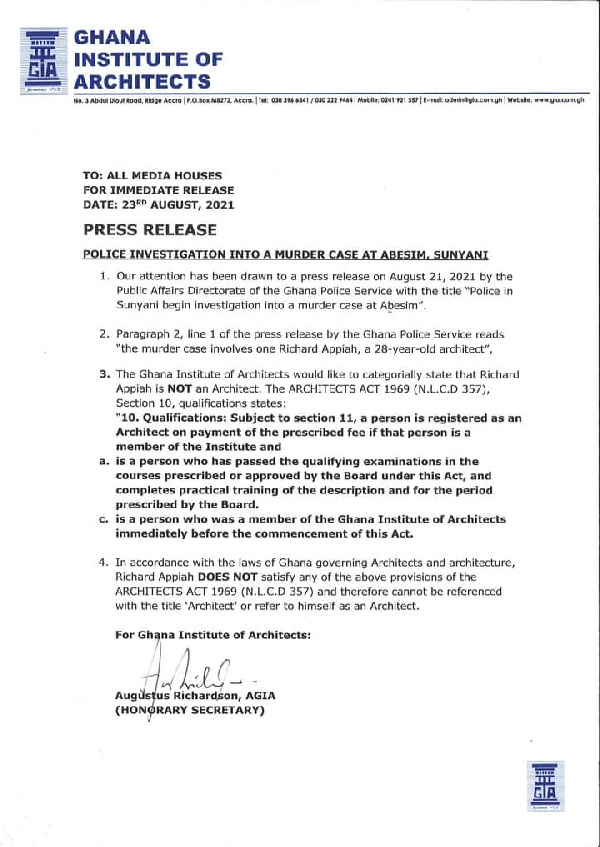 The Police in Sunyani on Friday, August 20, arrested a man for allegedly killing two children.

The suspect, Richard Appiah was arrested after the father of one of his victims, Louis Agyemang Junior, aged 12, filed a report against him to the Police.

According to the Police statement, the victim’s father, 56-year-old Thomas Adjei, reported that the suspect, who is also his stepson, had come for Louis around 5:30 pm on Friday, August 20.

But, at about 10 pm, Mr Adjei said his son had still not returned home.

In the company of his four brothers, they arrested the suspect, who he believed knew the whereabouts of the 12-year-old boy and brought him to the station for questioning.

The Police, together with the complainant and suspect, then proceeded to the house where the suspect resides in the Alaska area near Abesim.

The statement revealed that the team found the deceased lying in a supine position in a room, while another murdered person was found in a different room.

During a further search of the house, pieces of flesh suspected to be parts of a different person were found in a double-door fridge.

The name of that deceased was given as Stephen, aged 15 years. Parents of the other victims are yet to identify their bodies.

Meanwhile, the Police have arrested a new suspect in connection with the murder of the three persons.

[Galamsey] GAF, others collaborate to clears 230 platforms, 365 chanfans in bid to flush out miners

Education 27th September 2021
0
The University Teachers Association of Ghana (UTAG) is today, Monday, September 27, 2021, expected to meet government representatives on the fate of...

CDD survey show Ghanaians not in unison on country’s direction