The Accra Metropolitan Assembly (AMA) has postponed the launch of “Light Up The City 2020” project.

A statement signed by the Assembly’s Head of Public Affairs, Gibert Nii Ankrah on Thursday, 17 December 2020 indicated that the project, which as due to be launched today Friday, 18 December 2020 had to be rescheduled due to “the current political protests and vandalism of installations meant for the project”.

“Last year’s Christmas season witnessed a significant innovation, including the visual transformation of some major corridors and monuments into thrilling Christmas lighting displays which both residents and patrons of the city were very delighted to behold but with current happenings, the event has been rescheduled to protect life and property,” the statement noted.

The Assembly, therefore, appealed to all demonstrators to exercise restraint when protesting around the installations.

The Assembly stated that “formal communication will be sent out to all participating partner corporate institutions in due course on a new date for the launch of the “Light Up The City 2020″ project”. 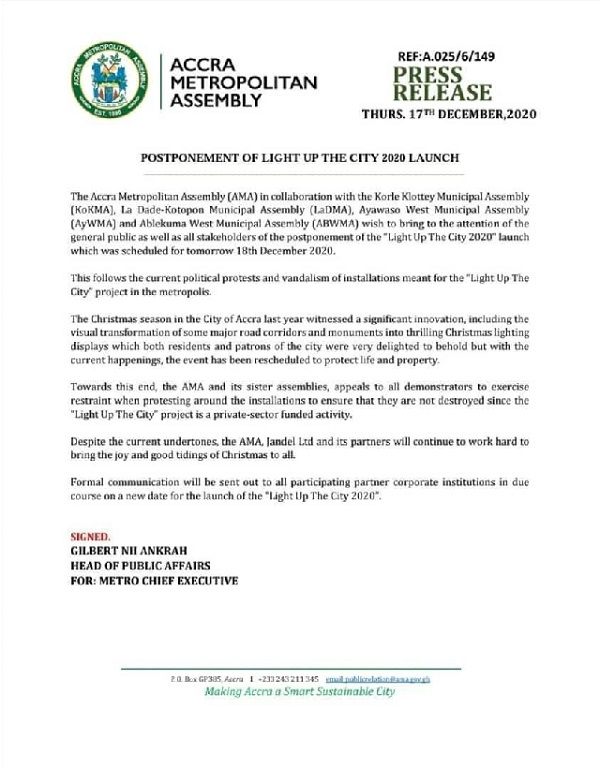 Coronavirus Updates 25th January 2021
0
Mexico’s President Andres Manuel Lopez Obrador said on Sunday he had tested positive for COVID-19 amid the country’s deadliest week yet in...

Coronavirus Updates 25th January 2021
0
The U.S. Centers for Disease Control and Prevention is stepping up efforts to track coronavirus mutations and keep vaccines and treatments effective...