This announcement was contained in a press release signed by the Chief of Staff, Akosua Frema Osei-Opare dated Tuesday, November 17, 2020.

The statement said, “This is to acknowledge receipt of your letter dated November 16, 2020 (Ref: OSP/2/AM/14), addressed to the President of the Republic conveying to him your decision to resign from office as Special Prosecutor, which he has accepted”.

President Akufo-Addo also directed the Chief of Staff to ensure that monies and benefits due the former Special Prosecutor are paid.

“The President has taken due note of the other matters raised in your letter and the government will issue a statement responding to them in due course. The President has directed me to ensure that all emoluments and benefits due you under the law are paid to you accordingly,” the statement added.

Martin Amidu resigned from his position as the special prosecutor on Monday, November 16, 2020.

He indicated that President Akufo-Addo has not been able to ensure his independence and freedom of action since he resumed office.

In a letter addressed to President Nana Akufo-Addo, Martin Amidu said his decision is to “enable Your Excellency to take steps to appoint a replacement to that position as required by law.”

Mr Amidu was nominated by President Akufo-Addo as Special Prosecutor on January 11, 2018, and was subsequently approved by Parliament. 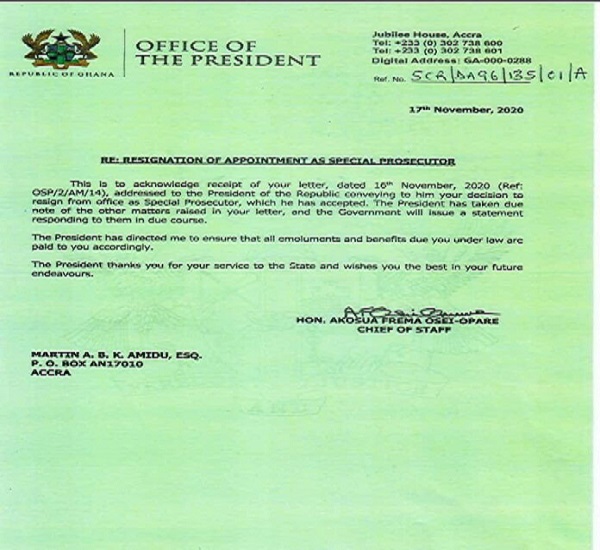 Travel 25th November 2020
0
France's ski resorts, among the most popular in Europe, will not be allowed to reopen in time for the year-end holiday season,...

SHS student drops and die during WASSCE exams at Koforidua