Ghana has today, August 31, 2021, resumed the vaccination of its population with AstraZeneca vaccines, which were first shipped to the country under the COVAX facility in February.

After a mass vaccination in March, most people due for their second doses were disappointed as a shortage in India, and, indeed, across the world, meaning that the timelines would not be followed.

Desperation led to the government entering into a contract with middleman Sheikh Ahmed Dalmook Al Maktoum for Sputnik-V vaccines from Russia.

The contract failed and its termination has led to a refund from the Emirati middleman.

Fortunately, about 249,600 doses of the Serum Institute of India-made vaccines were received on Wednesday, August 18 for those eligible for the second dose.

Additional 350,000 are expected in the middle of September.

A release by the Ghana Health Service (GHS) on the eve of the resumption of the AstraZeneca vaccination said the doses will be administered from Tuesday, August 31 to Saturday, September 4.

They are meant for persons 18 years and above who received the first dose five months ago.

“All eligible persons are advised to bring along a valid National ID card (preferably the one presented for the 1st dose) and their COVID-19 vaccination card to vaccination centres within their respective regions.”

The regional health directorates have been clothed with the power to designate sites for the exercise. 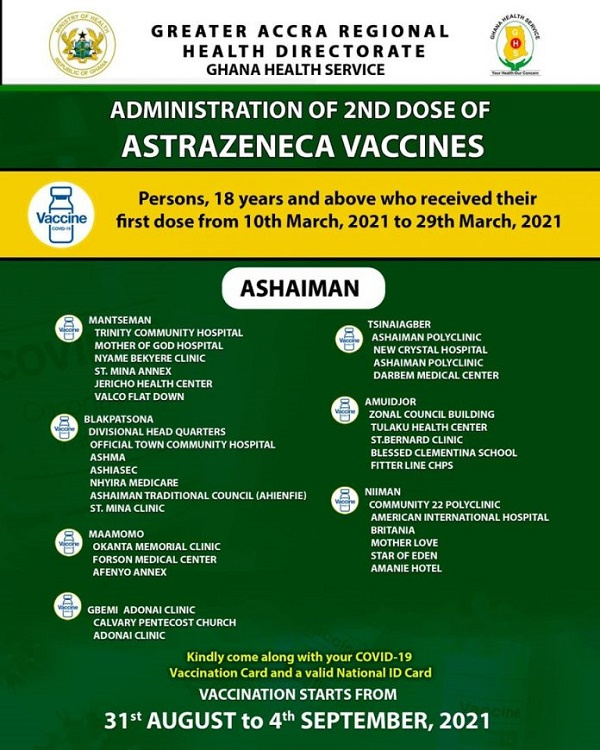 Coronavirus Updates 28th November 2021
0
Government will, Sunday afternoon, announce additional measures to control the COVID-19 spread ahead of the Christmas festivities. The measures...

Crime 28th November 2021
0
General Lance Corporal Victor Antwi Yeboah has been arrested for allegedly harassing and “violating the dignity” of a female victim.

Sports 28th November 2021
0
Teofimo Lopez promised a first-round knockout and pushed hard to accomplish just that by unloading on George Kambosos, but in a stunner,...

Vietnam: 80,000 citizens to be evacuated as 3 residents test positive...