Two Technical Universities have lost GH¢105,345,171 due to contract irregularities between January and December 2019, the Auditor-General’s (AG) report has said.

The report looks at the accounts of public Technical Universities and Polytechnics.

As mandated by law, these public Technical Universities and Polytechnics were asked by the Auditor-General to submit their reports for the period under review.

In the Auditor-General’s report, the amount of GH¢105,345,171 was the highest in terms of costs since 2015, and the latest in the increasing levels of costs and wastage in terms of contracts in which the Technical Universities were involved in.

The Auditor-General’s report stated that the contract irregularities were “related to the unjustified review of the contract process, excessive payment of mobilization fees, and management’s inability to exercise due diligence in the award of contracts for project work”.

The report added: “They were caused by management’s inability to adhere to provisions in contract documents, improper contract budgeting and commencing many projects at the same time.” 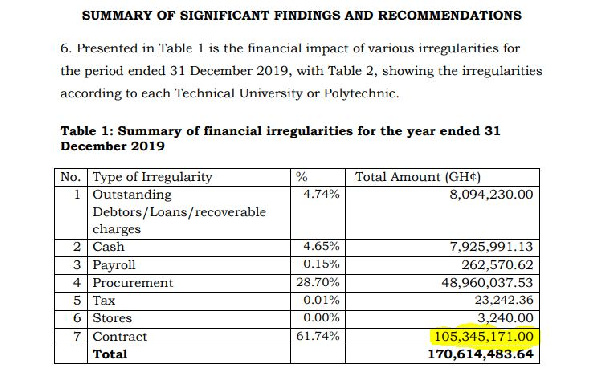 Coronavirus death toll peaks at 771, with over 1,300 active cases

World 19th April 2021
0
South Korea's government on Monday said it had proposed a law to require its citizens to get official permission before using the...

World 19th April 2021
0
The Kremlin on Monday said Russia would continue to respond in kind if further sanctions were imposed, after new U.S. measures last...

Kremlin says Russia will continue to respond in kind to any...

[Complete List] Names of Deputy Minister nominees ahead of appointment

Teachers to receive laptops from GES in move to pilot online...