There have been no counting and declaration of results from the Special Voters by the Electoral Commission. It will be done after the polls on December 7, 2020.

The Constitutional Instrument 94 allows for a Special Voting day for voters who, as a result of election duties, will not be able to be present at the polling station where the voter is registered on the day of the election.

The Special Voters list this year includes security agencies, the media and officers of the Electoral Commission who will be on assignment on election day.

This exercise happened on Monday, December 1, 2020, and few hours after voting, some Facebook users and Twitter users posted what is purported to be the results from the Special Voting in favour of their preferred political party. 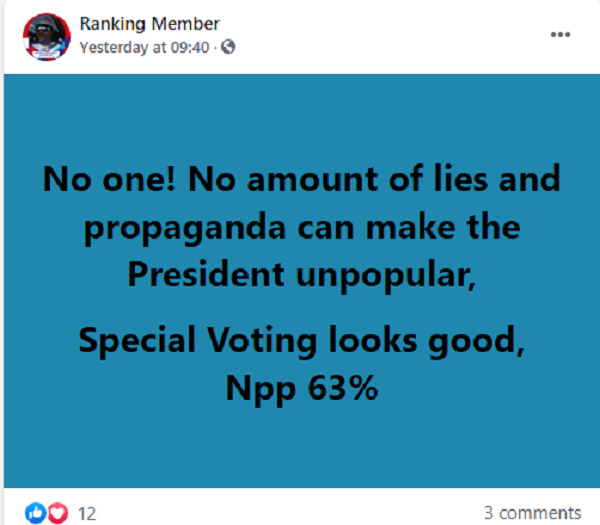 Are Special Votes counted and results declared before election day?

The 2020 Constitutional Instrument 127 specifies that the ballot boxes are sealed after the special voting with the seals of the Electoral Commission and opened at the time of the counting of the votes from the day of the election.

Regulation 23 of 2020 CI 127 which details the process of the special voters’ list also indicates who should be in charge of the ballot papers after the close of the special voting and the day for it to be counted.

(11) The returning officer shall, at the end of the special voting,

(a) ensure that the ballot boxes are kept in safe custody after the poll has closed;

(b) ensure that the ballot boxes are sealed with the seals of the Commission and any candidates who wish to add their seal; and

The Director of Communications and Corporate Affairs at NCCE, Mrs Joyce Afutu stated that,

“No vote has been counted yet, everything will be counted and results declared after election day on Monday.’’

Who declares the election results?

Only the Chairman of the Electoral Commission, according to the 2020 C.I. 127, is responsible for declaring the election results after the assembling and collating of results from the regions and duly following the necessary protocols, after election day on 7 December,

Till then, all other declaration of results are to be disregarded.

The claim indicating that NPP records 63% from the special voters is false. The C.I 127 does not permit the counting of ballot boxes from Special Voters till after the day of the election on 7 December.

Additionally, only the Chairman of the EC is mandated to declare the results after all ballot boxes have been counted after election day.

News 26th January 2021
0
It is no secret that former presidents Jerry John Rawlings and John Agyekum Kufuor had a frosty relationship. While they both tried in...

Coronavirus Updates 26th January 2021
0
Some male victims of COVID-19 who have fully recovered from the disease are struggling to have penis erection for sexual pleasure, the Ghana Medical...

Entertainment 26th January 2021
0
According to GhanaTalksRadio, Snoop Dogg is the definition of what longevity means in Hip Hop. Since making his debut in the early ‘90s,...

2020 Election: You must set up an independent body to probe...