The government of Professor John Evans Atta Mills declined to repay the $45,000 allegedly owed boxing legend DK Poison by the state due to lack of evidence.

A document in circulation which according to Citi FM, has been confirmed by lawyers of DK Poison shows that the Mills administration turned him away because they were not convinced the state indeed borrowed money from him.

This revelation comes barely three days after President Nana Addo Dankwa Akufo-Addo gave an order for the 44-year-old debt to be paid.

President Akufo-Addo in a statement directed at the Ministry of Finance said that the payment was being made on ‘compassionate grounds’.

The president’s gesture was well received by the great boxer who extolled him and God.

Ekow Asmah, a spokesperson for DK Poison disclosed that the boxing great broke down after being told of payment(repayment) of his money.

“When I broke the news to him this morning, D.K. Poison broke into praise of God for making it happen for him. ‘Oh, this is the work of God’, he acknowledged, almost in sorrow, given the history of his plea for the refund dating back over four decades”, Mr Asmah said.

By his own account and those around him then, Poison in 1976 used $45,000 of his $75,000 match purse to import mackerel for the state. The agreement was that once he returned to the country, the Acheampong administration was going to pay him.

D.K Poison as he is affectionately called, is the first Ghanaian to win a world title, a feat he achieved in 1975 when he defeated Reube Olivares in a WBC featherweight title bout. 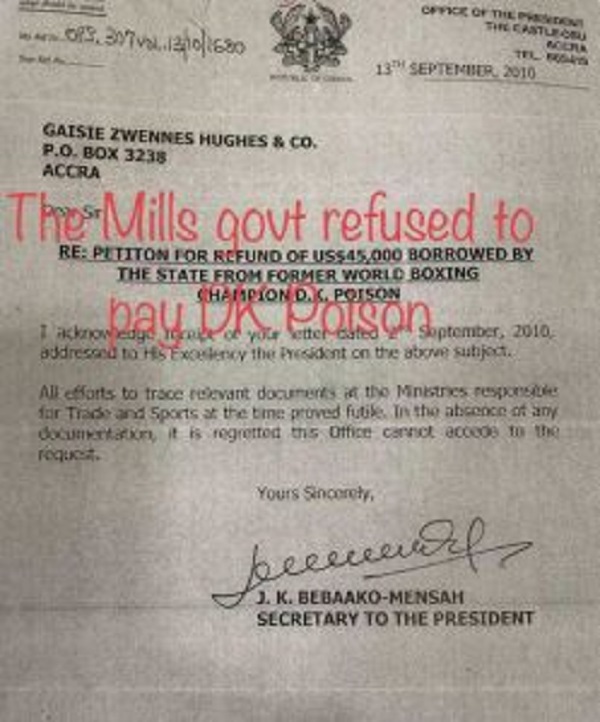 We don’t want autocratic husbands, we want to be independent – Zongo Women cry out

Coronavirus Updates 31st October 2020
0
India’s coronavirus caseload stood at 8.1 million on Saturday, with 48,268 new cases being recorded in the last 24 hours, data from...

World 31st October 2020
0
Nineteen people were killed in Turkey and Greece after a strong earthquake struck the Aegean Sea on Friday, bringing buildings crashing down...

Gov’t moves to launch an $85m water and sanitation project in...

VIDEO – Sex for grade Scandal in University of Ghana and...

Poverty is the cause of monetization in Ghana’s politics – Dr....