The Ghana Medical Association (GMA) has said Hydrogen Peroxide has not been approved for the prevention and treatment of Coronavirus.

The GMA’s caution comes after a former Provost of the College of Health Sciences of the University of Ghana, Rev. Emeritus Prof. Andrews Seth Ayettey had recommended the use of Hydrogen peroxide as immediate protection against the coronavirus.

“Recently, a friend who was not using hydrogen peroxide had COVID-19. His wife, three elderly children, and mother-in-law who had been with him for 5 days and who all tested positive for the virus were encouraged to use hydrogen peroxide for mouth washing, throat gargling and nose cleansing, in addition to their prescribed medications of vitamin C, Ivermectin and Zinc. After two weeks, they all tested negative. None progressed to develop clinical symptoms of the disease.

“We are, therefore, more emboldened to recommend the use of hydrogen peroxide to protect against COVID-19, alongside the public health protocols and other remedies being actively promoted by the government. This ‘traditional’ oral hygiene fluid is inexpensive, readily available, and safe to use in low concentrations.”

But a statement issued by the GMA on Thursday, February 4 said “The general public is advised to handle the product as any other medicinal product and that the misuse of same could lead to serious physical and undesirable medical consequences.

“The public is also advised to consult appropriate health professionals (prescribers) before they purchase such products.”

It stressed, “Presently, Hydrogen Peroxide has not been approved, authorized or recommended by the Food and Drugs Authority (FDA) (Ghana), Ghana Health Service (GHS), Ministry of Health (MoH), World Health Organization or any other reputable international drug and health regulatory body for the prevention or treatment of COVID-19.” 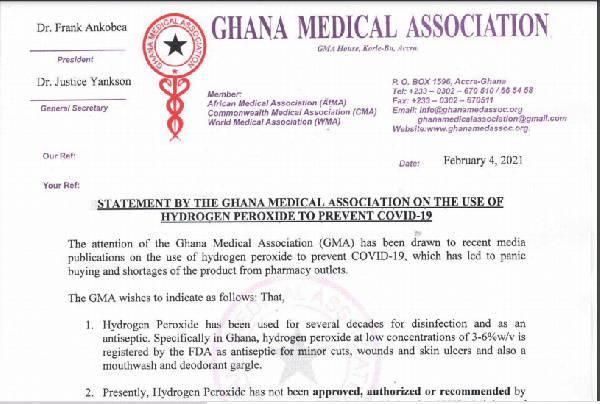 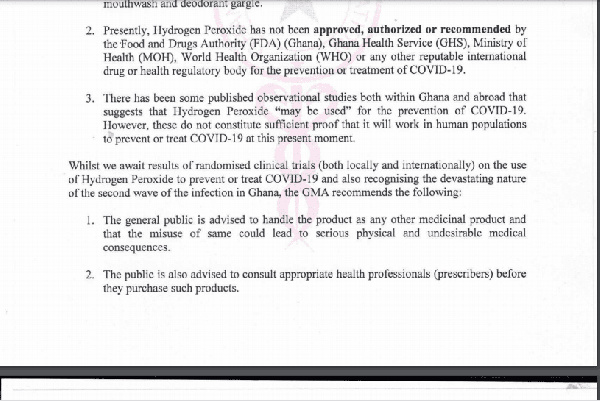 Drake announces the release of his long-awaited ‘Scary Hours’ album

Entertainment 4th March 2021
0
As Certified Lover Boy grows closer, Drake looks to be giving fans an appetizer with the announcement of new music. The Toronto rapper...

News 4th March 2021
0
The 64th Independence Celebration of Ghana will be held in the front yard of the government seat . In...

News 4th March 2021
0
The petitioner in the 2020 election petition, John Dramani Mahama will today, address the media after the apex court presided over by Chief justice...

Drake announces the release of his long-awaited ‘Scary Hours’ album