Lawyer for the petitioner in the ongoing election petition, Tsatsu Tsikata has filed a motion of leave to re-open their case in the 2020 election petition, to enable the chairperson of the Electoral Commission, Jean Mensa testify in court.

Their motion comes after the Supreme Court ruled that the chairperson will not undergo cross-examination.

The court, presided over by Chief Justice Anin Yeboah said “we are not convinced and will not yield to the invitation being extended to the court by the counsel for the petitioner to order the respondents to enter the witness box in order to be cross-examined.”

“Accordingly, we hereby overrule the objection raised by the counsel for the petitioner against the decision of the respondents declining to adduce testimonies in this petition”, the Chief Justice said.

This ruling comes after the counsel of the first and second Respondents objected to producing witnesses to be cross-examined in the ongoing election petition hearing, though they initially filed witness statements at the onset of the petition.

The lawyers for the two respondents on Tuesday made the application to the court.

But the lead counsel for the petitioner, Tsatsu Tsikata argued that the witness statements filed by the respondents binds them and hence make them obliged to be cross-examined.

Based on the court ruling, the petitioner John Dramani Mahama, through his lawyer, has filed a motion of leave to re-open the case, to request that the chairperson of the Electoral Commission, Jean Mensa testify in court.

The petition which was filed after the hearing today will be moved on Monday 15th February 2021 for the petitioner to be heard.

Below is a copy of the motion 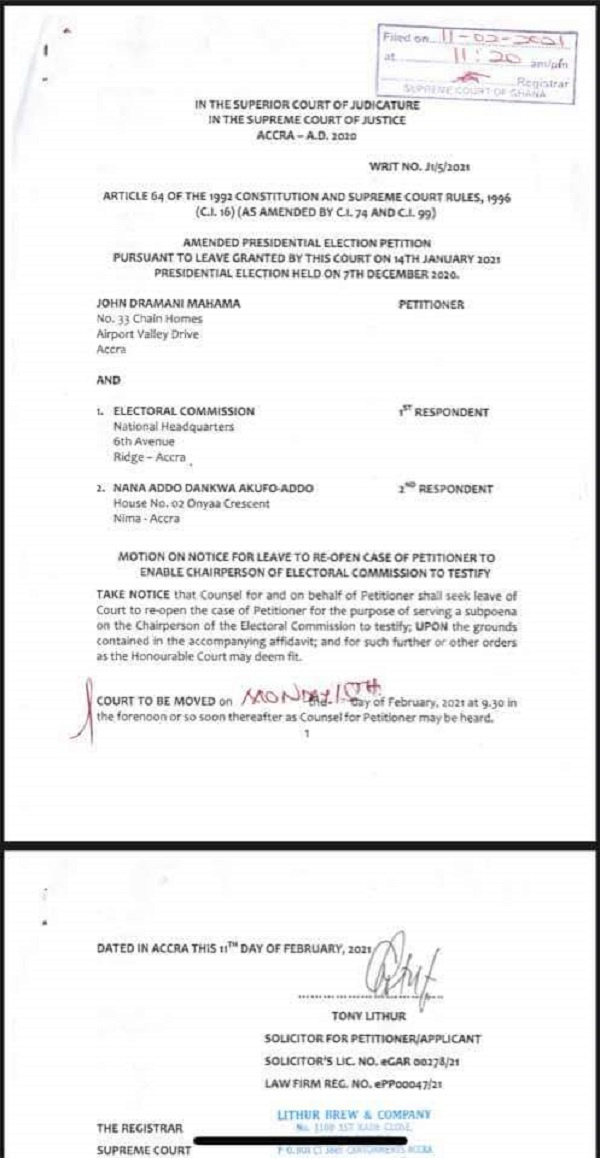 Ghana @64: Akufo-Addo’s next one year promises

Ghana @64: We Must Work Together To Build Ghana – Mahama

No amount of resistance can put UNI-PASS on hold – Deputy...