Meridian Port Services Ltd (MPS) has relaunched its sea turtle conservation initiative, this is in fulfilment of the company’s Environmental Action Plans for Sea Turtle Conservation and as per the International Finance Corporation (IFC) Performance Standard (PS6) for Biodiversity Conservation and Sustainable Management of Living Natural Resources and the No-Net-Loss commitment.

The program which commenced in November 2018 involves the safe relocation of turtle eggs at risk in their natural environment into an enclosed hatchery replicating natural conditions, creating a conducive atmosphere for them to hatch and finally releasing the hatchlings into the ocean.

Between November 2018 and August 2020, 24,674 eggs were retrieved and brought to hatchery while 16,198 hatchlings were successfully released into the sea during this same period. The current hatchery has 2 Sea Turtle species namely; Olive Ridley (88%) and the Green Turtle (12%).

At a ceremony to launch the new conservation program, CEO of MPS Mr. Mohamed Samara noted that MPS is committed to all activities that promote environmental and social sustainability.

While at it we only deploy innovative and globally acceptable methods to ensure the preservation of flora and fauna and restitution for any loss to personal or communal assets amongst others.”

Apart from finding a suitable environment for sea turtles to safely hatch, the program also involves a community awareness initiative where host communities of the hatchery are sensitized on turtles and the need to conserve them. It also highlights human activities that are detrimental to the life of sea turtles.

Prampram, New Ningo and Old Ningo are among the offset communities who have been sensitized. This awareness is done twice annually during peak nesting season between October to March to help increase understanding of importance derived from sea turtles and the need to protect them. 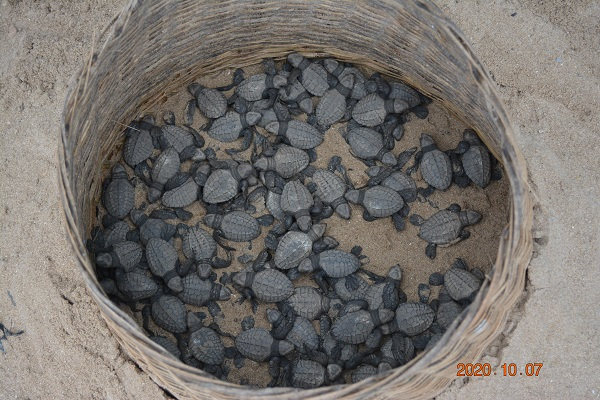 This year’s first awareness was conducted during September where community members and fishermen were informed on the importance of sea turtles and the need to protect them and how the aforementioned communities can contribute to this valiant initiative.

Mr. Samara added that he was pleased with the progress made on this project and projected that more will be done in this regard to sustain the lives of this vital sea creature. “We are happy to join the thousands of people around the globe advocating and taking action for the protection of our ecosystem. This will be continued so as to build a socially responsible platform for generations to come.”

Mr. Dimitri De Pues, The MPS QHSSE Consultant, explained that the awareness program also seeks to instill amongst the community the importance of not consuming turtle meat or eggs, as well as the protection of these species.

“Other initiatives under the Biodiversity Action Plan of MPS include the training and deployment of six beach patrol staff and community volunteers to identify, catalogue and protect all sea turtle emergences from the sea to lay their eggs on 9KM of beach stretching from Old Ningo to Prampram.

Nests are protected from dog predation, erosion, human poaching, inundation and other threats. Sensitization of fishermen to safely release turtles mistakenly caught or entangled in their nets also forms a part of this important endeavor.

Finally, the establishment of an eco-tourism surrounding the conservation of sea turtles will also be undertaken soon, as well as supporting national enforcement mechanism for the protection of these magnificent creatures under the existing laws of the Republic of Ghana” Said Mr. De Pues. 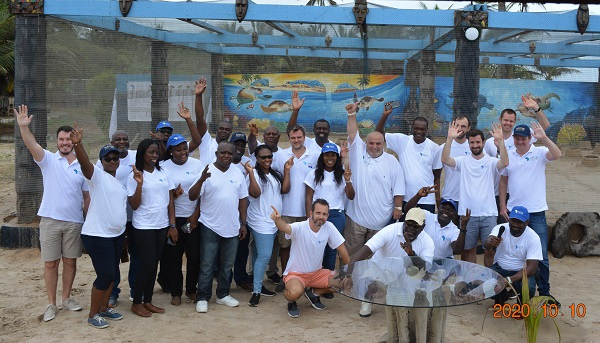 According to the International Union for Conservation of Nature (IUCN) 2014, five species are known to occur along the coast of Ghana which includes Olive Ridley, Green Turtle, Leatherback, Hawksbill and Loggerhead; the latter two of which are extremely endangered.

Of these, MPS Tema Port Project baseline studies in 2016 identified three (3) species that inhabit the construction area. These include the Olive Ridley, green and the leatherback turtles.

Subsequently, a monitoring program was initiated in October 2017. The monitoring included daily day and night patrols of the 2 km stretch of the construction area to identify any turtles nesting in the area and ensure their eggs were safeguarded and relocated for hatching.

Sea turtles are “air breathing” reptiles that have roamed the Earth’s oceans for over 100 million years. They are regarded as an important link to marine ecosystems, such as coral reefs and seagrass beds, some sea turtles also eat large numbers of jellyfish and provide a source of income to local communities as a draw for ecotourism.

In the last few years, reports have shown a sturdy decline in sea turtle. Thousands of marine turtles are accidentally caught by fishing gear each year, and the beaches upon which they depend for nesting are disappearing.

Females use sandy beaches for laying their eggs hence MPS collaborates with local communities to reduce egg harvesting and plastic pollution. It also encourages fishers to switch to turtle-friendly equipment.