Sympathizers of the National Democratic Congress (NDC) in the Upper East Regional Capital, Bolgatanga, have poured on the streets to protest against the Electoral Commission (EC) for declaring Nana Addo Dankwa Akufo-Addo as President-elect of the Republic in the just ended election.

The protests began around 7 pm at the premises of the party’s constituency office.

The protesters torched car tyres, blocked the Tamale-Navrongo stretch of the highway and chanted their disapproval towards the actions of the EC.

They were mainly made up of young men and women, and gave a strong public expression of disagreement in the results announced by the EC.

It was not clear who was leading the demonstrators as there were no known faces at the scene. But GhanaWeb sources revealed that some party executives were behind the protests.

The Operations team of the Regional Police Command following a tipoff have moved in and taken control of the situation. The gathering has been dispersed and the road cleared for traffic flow.

Some personnel of the Police Service have been positioned at the scene to maintain absolute calm.

No arrests were made as at the time of filing the report. 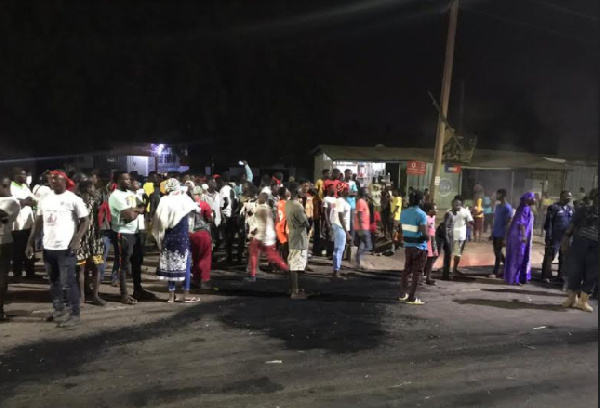 News 16th April 2021
0
The National Road Safety Authority is currently having discussions with the Ministry of Transport and other key stakeholders in the transport sector...

News 16th April 2021
0
President Nana Addo Dankwa Akufo-Addo, in his capacity as Chairperson of the Authority of Heads of State and Government of the Economic Community...

Tema and environs to suffer water shutagge between April 20 and...

Don’t be too hasty to declare winner – Mahama urges EC

Election materials yet to arrive at Lashibi in Tema West Constituency