The media war between Kwaku Annan of Net2 TV and Nigel Gaisie, the founder of Prophetic Hill Chapel, has finally ended up in the courtroom after the former acted on a threat to sue the cleric.

Accusations and counter-accusations have been the order of the day between the two with Nigel Gaisie tearing up a letter of caution from the lawyers of Kweku Annan.

But the two men are now ready to square it off in the courtroom with Kweku Annan taking the initiative to haul Gaisie before an Accra High Court.

A suit sighted by GhanaWeb shows that Kweku Annan has slapped a GH¢2.5million defamation suit on Nigel Gaisie.

Kweku Annan also wants the court to compel Gaisie to retract and apologise for some comments which he claims have lowered his respect in the eyes of the public.

Excerpts of the suit reads: “the plaintiff claim is for; B. Damages in the sum of Two Million, Five Hundred Thousand Ghana Cedis (GH¢2,500,000) for defamation.

“C. An order direct at the defendant to retract all such defamatory statements and apologise to the plaintiff.”

“He is so cheap, he blackmails men of God by asking them of 1000 cedis. Kennedy Agyapong must be careful else Kweku Annan will dent his reputation”, Nigel Gaisie said.

Annan through his lawyers sent a letter to Gaisie asking him to apologise but Nigel Gaisie shredded the statement.

“I came today and they gave me a letter that you are demanding a retraction and an apology, you see you are a little man. You give me two weeks to retract, you see you are not confident and you are not bold. I think you should know me, that I am not a coward, you are a bribe-taker, you took a bribe, it’s on tape. You sit on television belonging to people who have lived life and you insult men of God,” he said. 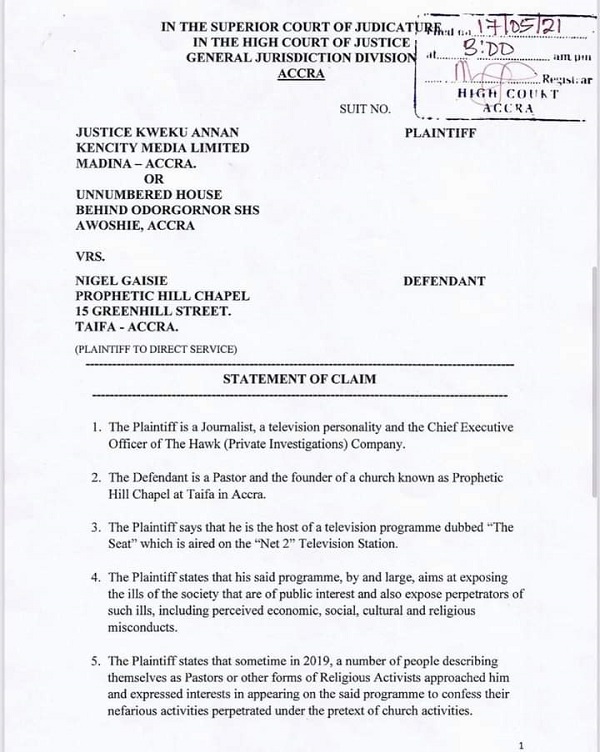 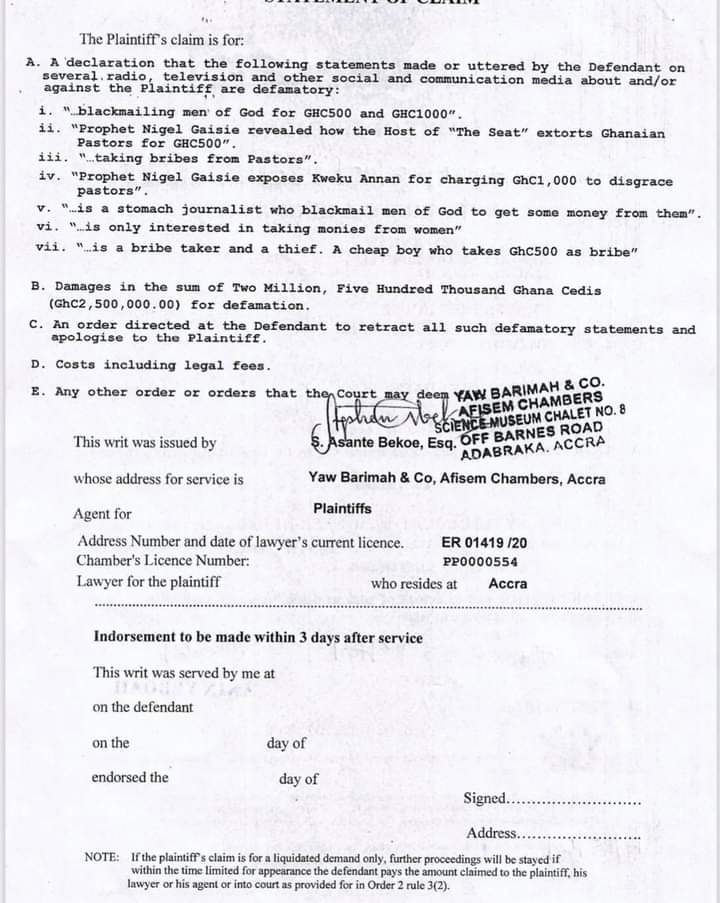 News 24th June 2021
0
The Executive Director for the Institute of Energy Security, Nana Amoasi VII, has taken a swipe at the Attorney General, Godfred Dame, describing...

Crime 24th June 2021
0
Nine persons have been arrested by the Airport police command for persistent harassment of motorists along some traffic intersections within the Airport...

Attorney General must be held accountable for Ghana’s $170m debt –...

Cardi B apologises for promoting fundraiser for Armenia