Over four hundred officers of the Ghana Armed Forces have been deployed for the fourth phase of the fight against illegal mining dubbed Operation Halt II.

In a press release announcing the commencement of the operation, the Ministry of Information said the operation is aimed at removing all persons and logistics involved in mining from water bodies.

According to the release signed by the Minister of Information, Kojo Oppong Nkrumah, the new phase of Operation Halt II focuses on the Ankobra River and its tributaries.

The Ministry thus cautioned the public to stay away from mining in water bodies to avoid any action by the military. 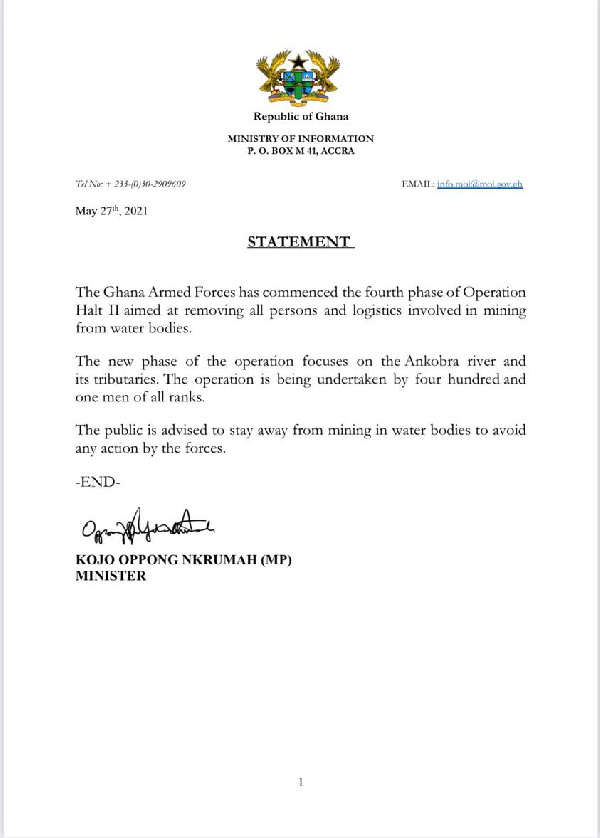 UN says Burkina Faso massacre was carried out by children between ages 12 and...

World 24th June 2021
0
A massacre in northeast Burkina Faso in which more than 130 people were killed this month was carried out mostly by children...

World 24th June 2021
0
Russia warned Britain on Thursday that it would bomb British naval vessels in the Black Sea if there were any further provocative...

Britney Spears claim she was drugged and forced on birth control pills by her...

Entertainment 24th June 2021
0
Britney Spears has spoken out against her conservatorship at a court hearing in Los Angeles, where she alleged that her dad drugged her...

Formula 1: Silverstone to welcome at least 140,000 spectators at British...

Akufo-Addo supplies Ministry of Health with over 10,000 hospital beds