The Volta Regional Police Command in Ho has arrested 21 persons believed to be LGBTQI activists.

The suspects; 16 females and 5 males were arrested while holding a conference at the Nurses and Midwives Hotel in Ho.

In a press release, the 21 arrested LGBTQ+ activists were “remanded into police custody by the Ho Circuit Court for unlawful assembly at the Nurses and Midwives Hotel, Ho.”

“This follows the arrest of the 21 at their supposed conference at the Nurses and Midwives Hotel, Ho yesterday May 20, 2021,” part of the statement read.

According to the Public Affairs Officer of the Volta region police service, Sergeant Prince Dogbatse, the suspects are from the Greater Accra, Ashanti, Upper East, Upper West, Western regions.

He added that their arrest was due to the suspects advocate for LGBTQ+ activities.

The accused persons will reappear before the court on June 4, 2021.

Read the Police Service’s statement below. 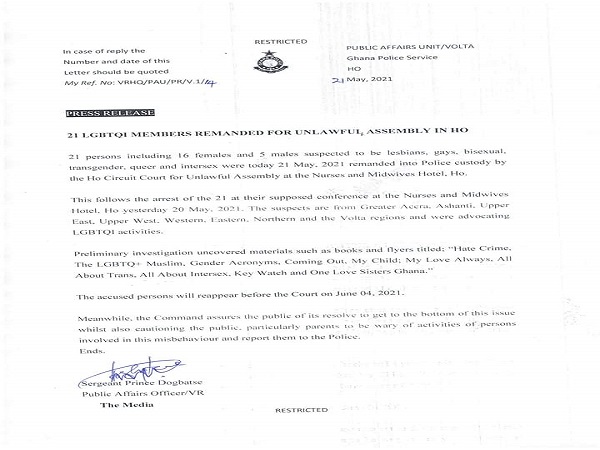 The Tema Police woman for scamming 30 people with fake dollars

Four detained in Uganda for killing and dismembering lions