One of the industrial factories under the flagship One District One Factory policy, Casa De Ropa Ghana, has presented an honorary award to President Nana Dankwa Akufo-Addo in commemoration of the factories commissioning.

The presentation was made during an event at the 1D1F Secretariat in Accra on Tuesday, September 15, 2020, where the company and two other companies: Petersfield and Ray Group Limited, and Ekumfi Fruits and Juices were presented with certificates of recognition endorsed by the president.

The award according to the company was to honour the president for the commissioning of the factory specialized in the production and processing of orange-fleshed sweet potato (OFSP) at Gomoa Bewoadze on August 21, 2020.

The National Coordinator of 1D1F, Madam Gifty Ohene Konadu, who received the award on behalf of the president, speaking at the event said “I want to assure you that as a secretariat and as stakeholders we will continue to support you in all your endeavours, to be sure that you achieve greater heights. So that together we all can achieve a Ghana beyond aid.”

She also commended the three recognized companies and other 1D1F factories as well as its promoters for believing in the president’s dream of building a self-reliant and industrialised Ghana. 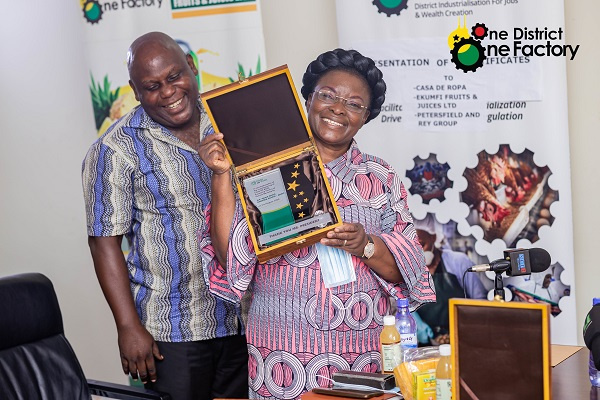 The award was received on behalf of the president by the National Coordinator of 1D1f, Madam Gifty Ohene Konadu

The One District One Factory Secretariat on the assumption of the Akufo-Addo government was instituted to facilitate the setting up of factories across the various districts in the country to put Ghana on the path of industrialization and self-reliance.

So far, the secretariat has overseen the establishment and operationalization of several factories across the nation with others also under construction.

Akufo-Addo supplies Ministry of Health with over 10,000 hospital beds

Akufo-Addo will not hand over power when he loses – Suhuyini

Politics 22nd September 2020
0
Member of Parliament(MP) for Tamale North, Alhassan Suhuyini has expressed doubts over the preparedness of the President of Ghana, Nana Addo Dankwa Akufo-Addo to hand...

CORONAVIRUS: Cases rise to 152 as death toll reaches 5 in...

GUTA locks up over 600 Nigerian shops at Circle