Following low numbers of students reporting back to school, some Senior High schools in the Sissala East Municipality are planning to embark on series of campaigns to address the situation.

Assistant Headmistress of the Tumu Senior High Technical School, Madam Grace Bonye, in interaction with GhanaWeb expressed her unhappiness about the low turnout of students.

Madam Bonye stated that though “the reporting generally was low” she was hopeful the numbers will pick up in the coming days.

To complement that, Madam Bonye promised “the school’s authorities would be embarking on a come back to school campaign with teams planned to visit communities” in the area.

She also stated that “pregnant students would be allowed to come back to school per Ghana Education Service directives”. 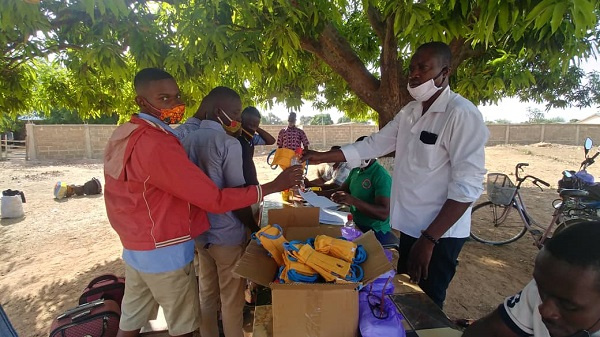 GhanaWeb’s Upper West Regional Correspondent observed that students were given nose masks and hand sanitizers at the entrance of the school.

It was observed clean-up of the school compound was the major activity being undertaken by students.

According to the Headmistress, an isolation centre has been prepared should the school record COVID-19 positive cases.

He blamed the situation on changes of dates as announced by the President during his 21st address on COVID-19.

During his address, the President announced that SHS 2 and SHS 3 students were to report back to school on January 18, 2021, which was later changed to January 15, 2021.

This, Mr. Kanton Luri Mohammed believed confused some students regarding the date of resumption.

On COVID-19, the school has a designated isolation centre should the school record a positive case.

Checks by GhanaWeb, however, showed students were largely seen not wearing nose masks on campus.

But the Headteacher has assured that steps were being taken to ensure the COVID-19 protocols are observed as classes started today.

News 3rd March 2021
0
President Akufo-Addo has directed the Auditor-General, Daniel Domelevo to proceed on retirement. This comes barely 16 hours after he...

Sports 3rd March 2021
0
Manchester United were held to a third successive 0-0 draw in all competitions after they failed to break down Crystal Palace in a dour Premier League clash...

Coronavirus Updates 3rd March 2021
0
The Ghana Health Service (GHS) has called on Ghanaians to ignore conspiracy theories about the COVID-19 Vaccine and prepare for the nationwide...

GNAT says reopening of schools is in order