A white Toyota 4X4 has been set ablaze by an angry mob at Sefwi Afere in the Bodi district of the Western North Region after the driver reportedly bumped into three people, killing two instantly while the third, sustained severe injury.

The car with registration number BA 1633-19, according to a report by Adom Online was en-route to an engagement ceremony in a neighbouring town – Sefwi Antobia in Juaboso district – when the unfortunate incident occurred.

Shortly after the incident, the driver, identified as Patrick Fuakye reportedly escaped the angry mob and rushed to the Sefwi Juaboso police station.

While waiting for a response from authorities, the mob took the law into their own hands and set the car ablaze. Residents who partook in the arson claimed the driver was reckless.

Meanwhile, the deceased persons have been identified as Kwabena Nkuah, 42 and Hamza Adamu, 16.

The survivor who is in critical condition, is receiving treatment at the Komfo Anokye Teaching Hospital. 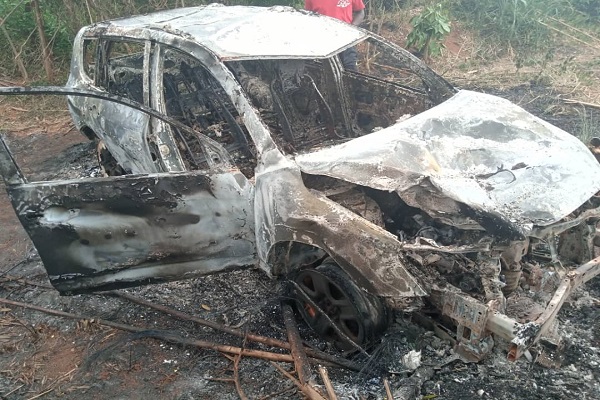 News 24th October 2020
0
A former Minister of Lands and Natural Resources, Alhaji Inusah Fuseini has defended the promise by the flagbearer of the National Democratic...

PDS – We have an incompetent Attorney General – UFP

Parliament approves US$243.6 million for the procurement of Trains