A pro-gay group, the Interfaith Diversity Network of West Africa (IDNOWA), has described the declaration by the Ghana Catholic Bishops’ Conference to close down the newly-opened Lesbian, Gay, Bisexual Transgender and Queer Intersex Rights (LGBTQI) office in Ghana, as careless.

The group also describes the arguments made by the GCBC as lacking “intellectual diligence.”

There has been a growing interest on the subject of LGBTQs in the country, generating a lot of conversation about the establishment of an LGBTI office in Accra.

On February 2, 2021, a tweet from @LGBTRightsGhana showed photos of the opening of the LGBTI office in Accra.

But, in a detailed two-page response to the Bishops’ Conference, the IDNOWA said that “the arguments made by the GCBE are outdated and badly informed.”

It continued that, “When the bishops refer to biblical perspectives on homosexuality, they present interpretation that are outdated according to the theological standards of the Roman Catholic Church.

“In 2019, the Biblical Pontifical Commission has published a study on biblical anthropology in which it has expressed the conclusion that the story about Sodom and Gomorra in Genesis chapter 19 does not deal with homosexual people, but with sexual violence exercised by the (mostly) heterosexual men living in Sodom breaking the customary law of hospitality,” it stated.

Also, it stated that “the theological issues of gender identity of trans people and sex characteristics of intersex people are not addressed at all which again shows a lack of intellectual diligence by the authors of this document.”

It however said that it acknowledges and “welcomes the declaration that the GCBC sees LGBTI people as humans with human rights,” but insisted that, “By rejecting attempts of LGBTI organizations to have a common office from where they can pursue the goal to realize their human rights, the GCBC basically deny the human rights of LGBTI people.” 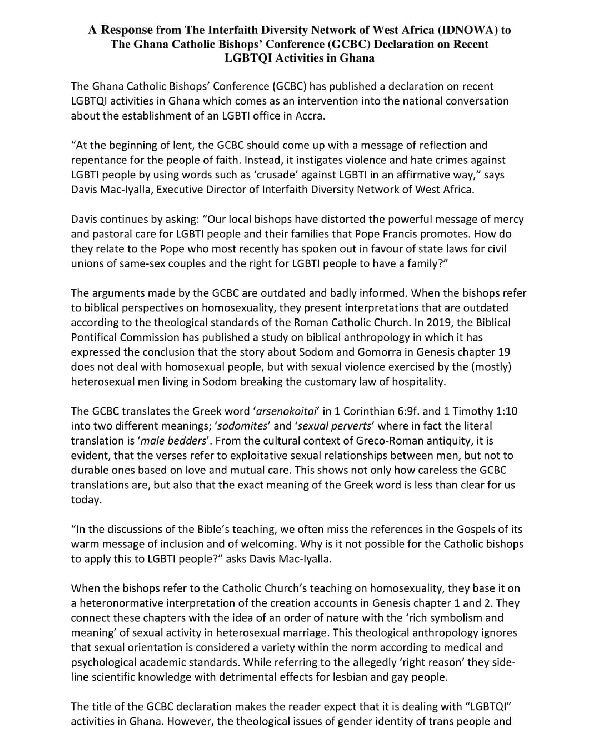 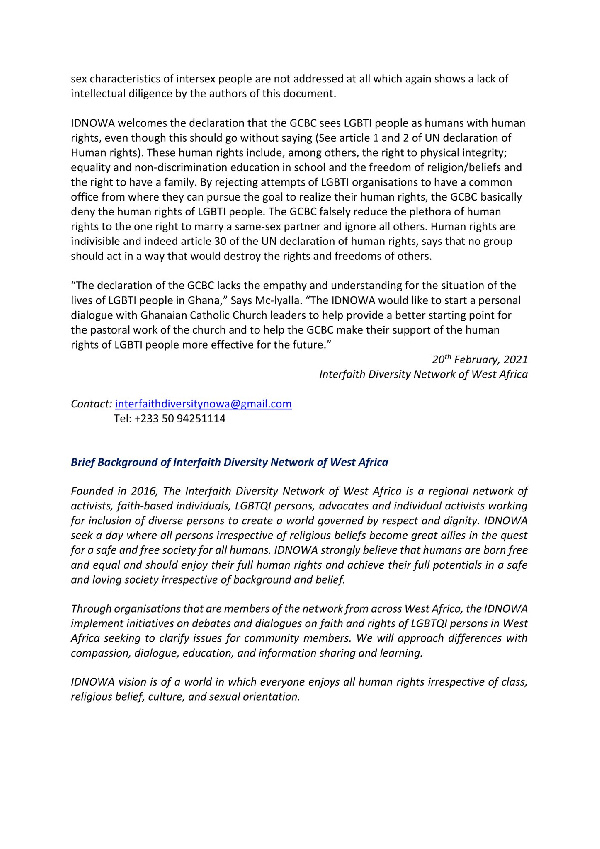 Sports 8th March 2021
0
Chelsea 2-0 Everton Chelsea scored a goal in each half to see off top-four rivals Everton and maintain...

Chelsea scores a goal in each half to see off top-four...

I do not regret launching a crusade against galamsey – Akufo-Addo