According to him, contrary to what Ofori-Atta said before parliament that he is not clothed with the powers to speak on issues relating to his trips, he is well equipped with the relevant information regarding the subject.

Kwakye Ofosu said that Ken Ofori-Atta did not want to throw President Akufo-Addo under the bus due to his relationship with him.

He stated in his estimation that, the presidency handles all matters concerning the president’s travels and that the finance minister should be in a position to address issues about it since his ministry handles the budget.

He believes that there is a deliberate attempt by government officials to deprive Ghanaians of information about President Akufo-Addo’s trips.

“Apart from the obstinacy and disrespect shown by President Akufo-Addo in the dissipation of scarce resources on his creature comforts through the continuous rental of luxurious jets at a time we have an equally luxurious and fully functional Presidential jet, there is also the deliberate refusal to answer questions relating to the cost of doing so.

“The Finance Minister’s claim that the matter rests in the bosom of National Security was a complete lie and ruse to evade the question. It is the presidency that handles matters of presidential travel and the money was paid from their budgetary allocation. National Security has nothing to do with it. The Finance Minister knows this. He is in a position to disclose the figures but simply refused to do so because he placed the protection of his cousin, the president, from public scrutiny above the need for accountability.

“As for the NPP minions defending this, they would defend Akufo-Addo even if he committed genocide so disregard them if you are a genuinely concerned Ghanaian who cares about how your taxes are used and demand answers for why this Akufo-Addo/Bawumia have decided to launch this attack on the public purse.

His remarks were in relation to recent revelations by his colleague member of the NDC that President Akufo-Addo’s preference for trips is draining the public purse.

Okudzeto who did a calculation of President Akufo-Addo’s trips said that government is running away from accountability. 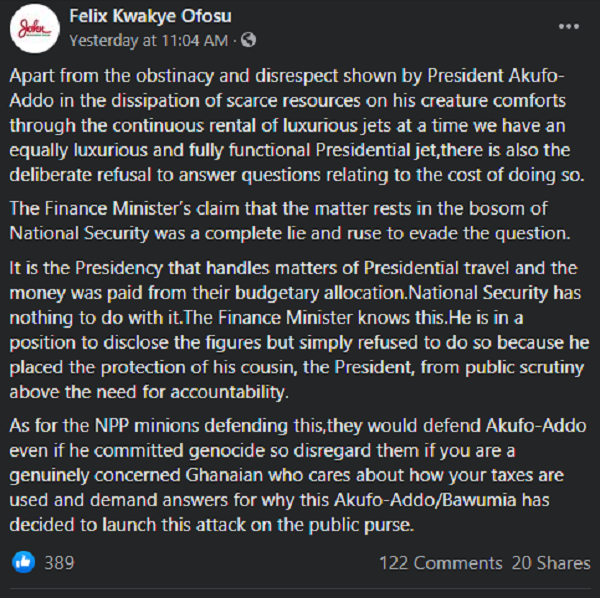 Ghana School of Law is full, no space for 499 more – Akufo-Addo

Queen Elizabeth will remain in power despite looming health concerns

Entertainment 21st October 2021
0
Queen Elizabeth will not step down as monarch despite concerns over her health after she was recently pictured using walking stick for first time...

‘Even people who lost the election are going around thanking people’...

EC must provide nose masks for all voters – NDC Chairman

I will beat him ‘like my child’ – Akroso chief dares...